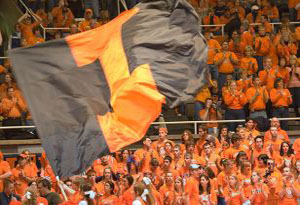 The University of Illinois ranked No. 15 in the nation in men's basketball home attendance during the 2013-14 season, according to figures recently released by the NCAA. Illinois averaged 15,246 fans per game, with a total of 243,931 people passing through the State Farm Center turnstiles spanning 16 games. Illinois played in front of five sellout crowds during the season and saw its attendance average increase by 429 over last year (14,817).