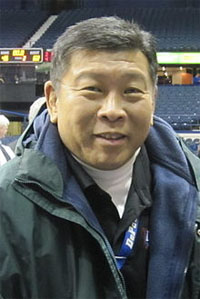 Alumnus Gene Honda is the busiest man in Chicago sports

He's the stadium voice of Fighting Illini football, the Chicago White Sox, and the Chicago Blackhawks.

If you don't know who Gene Honda is, well, you're just not trying hard enough.

Honda can been seen -- and mostly heard -- in so many places inside and outside of Chicago, it's almost impossible to miss him.

"I'm getting the chance to do a lot of fun things that I would never have dreamed of," said Honda, a 59-year-old lifelong Chicagoan. "It's funny, there are certain points where you're reminded of it. Things like when Thunderstruck starts at White Sox games, when they do the national anthem at Blackhawks games, when you walk into a cavernous facility like AT&T Stadium in Dallas. You're reminded that you're pretty darn lucky to be able to do all these things."

Anyone that's ever looked for a job likely has been advised to keep the resume short and concise. Honda would be the exception.

In addition to making frequent appearances on PBS in Chicago (WTTW), Honda has been the White Sox' public address announcer since 1985, and he has been behind the microphone full-time since the 1991 season, when the Sox moved into new Comiskey Park/U.S. Cellular Field.

Everyone seems to be maxed-out busy these days, but Honda takes it to a stratospheric level.

"It just kind of developed," Honda said. "I always thought I was going to be an Engineer."

College days
When he arrived at the University of Illinois-Champaign in 1972 after attending Senn High School, Honda wasn't quite sure of a future career. The process of elimination, however, was already in motion.

"I went to Illinois for anything but broadcasting," he said.

Engineering was Honda's first choice, but: "I didn't like that."

Finance was up next, and again, it was thumb's down.

"Thanks to my father's advice, I tried something that would help me to speak in public a little better," Honda said. "So I wandered into the student radio station."

Read more at the Daily Herald.