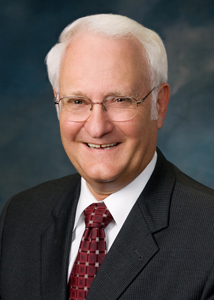 University officials are hoping to have President Bob Easter's successor in place before Thanksgiving, so the new president may participate in the search for a new UIC chancellor.

The selection of a new University of Illinois president has been accelerated, with plans to name Bob Easter's successor before Thanksgiving.

The search committee wants the next UI president to participate in the selection of a new Chicago chancellor, a search that was launched earlier this spring, UI officials said Friday.

Easter isn't due to retire until June 30, 2015. Trustees had previously said they wanted the next president to be selected by Jan. 1 to have plenty of time to transition into the job before Easter's departure.

The terms of board Chairman Chris Kennedy and trustees Pam Strobel and Ed McMillan — the three members of the board's executive committee — expire in January. Whoever wins the November governor's race will decide whether to reappoint or replace those trustees.

But Strobel, who co-chairs the presidential search committee, said the timing had nothing to do with the governor's race or the pending trustee appointments.

It was driven by Chancellor Paula Meares' decision to step down next January, Strobel said Friday. The chancellor's search began before the presidential search was launched and needs to keep moving, she said. Trustees decided the president's search should be "on a parallel path so we can have the president pick the chancellor."

The search committee heard Friday from Easter and James Applegate, executive director of the Illinois Board of Higher Education, about what to look for in the next UI president and the challenges he or she will face.

Easter repeatedly emphasized that the president should not, and doesn't have time to, run each campus. The chancellors should have the authority and autonomy to "act decisively" about faculty and other campus matters, he said.

The president spends most of his time on external duties, such as meetings with legislators, corporate leaders, higher education officials and donors, Easter said.

Preferably, the next president should have an academic background (even if he or she has a different job now), experience at a top-level university, some familiarity with the state of Illinois and "substantial global experience," he said.

He also noted the importance of the shared governance structure at the university, which gives faculty a major role in academic decisions.

"We bureaucrats come and go — faculty are forever," he said.

The growth of the Chicago campus, with its huge health care operation, will be a major factor for the next president, Easter said, mentioning a possible move to make it a member of the prestigious Association of American Universities. That would give Illinois students a second public AAU option in the state.

One search committee member said health sciences deans in Chicago told her they feel the Chicago campus is still treated as the "junior campus, the sister campus, the stepsister."

"The reality is that little sister grew up," Easter said.

"The president has to understand that the university is more than Champaign-Urbana," and that each campus has a unique culture and history and strategic needs, he said.

Easter was asked how much time a president should spend in Chicago versus Urbana and Springfield. He said he has struggled to find the right mix.

"I'm a downstater by nature," he said, but Chicago is the state's epicenter.

"The president needs to be where the president can be most effective for the University of Illinois."

Read more at the News-Gazette.