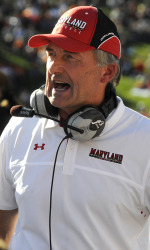 Coach Tim Beckman announced this week the hiring of Tom Brattan. The veteran coach brings over 30 years of experience to the Illini and comes to the University from Maryland, where he coached for 13 seasons.

“I was extremely pleased to find someone of Tom Brattan’s stature at this late date,” Beckman said. “He is very well respected around the nation as a coach, as a recruiter and – maybe most importantly – as a person. Tom has experience of working with Al Seamonson and Tim Banks during his time at Maryland, while also having a Big Ten background from eight years at Northwestern. I’ve never gotten so many calls of support during a coaching search as I did for Tom.

“He already has some terrific relationships with high school coaches in the Chicago area, which gives him a great recruiting start in that important region. We are very fortunate to find someone with all the characteristics and experience that Tom brings to Illinois. He will have to hit the road running when we start our staff meetings on Monday and practice on August 4, but I am confident that he will be able to do that."

Brattan is a 37-year coaching veteran, including 31 years at the collegiate level. During his 13 years in College Park, he helped the Terrapins to eight bowl games and some of the best offensive seasons in school history. Maryland broke the single-season school scoring record in 2001 and the single-season total offense mark in 2003.

He also has prepared a number of players for the next level with 18 former players reaching the NFL, including Bruce Campbell, a fourth-round choice of Oakland in the 2010 NFL Draft.