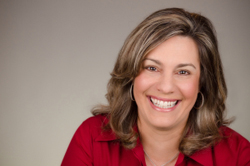 Andrea Darlas ('94 MEDIA), an anchor and reporter for WGN Radio in Chicago, recently guest lectured an Intro to Journalism class at U of I. See how she was impacted by this experience.

I spoke to a group of University of Illinois journalism students this week, hoping to inspire some young minds.  But what really happened was…they inspired me.

The invitation to speak to the group began as series of events in May when I gave the Commencement speech for the College of Media at my alma mater.  When I checked into the Illini Union the night before my speech, a blue cap and gown were hanging in the room.  So, naturally when I went to give the speech, I put the gown on and walked excitedly to Gregory Hall, where Dean Jan Slater and a group of professors were holding a small reception before the ceremony.  One of the professors, Jennifer Follis noticed my gown was missing the traditional, orange “Block I” crest on the front.  She quickly pulled me aside and told me to switch robes with her.  I thanked her and told her “I owed her one”.  She told me I didn’t owe her…but that I could make it up to her students in the fall by being a guest-lecturer.  I promised to oblige.  Fast forward to September, when Professor Follis emailed asking if I would speak to her “Intro to Journalism” students about the ups and downs of this crazy media world of which we’re all a part.

Originally, I’d planned to drive down to Champaign after the show that day…but with the fast moving storms, severe rain and flooding, and a midday anchor who’d taken ill, I emailed her saying I’d be unable to make the trip down.  Dave Eanet suggested we Skype the lecture, which we decided to do.  After Professor Follis and I established the video connection later that day, I watched the students eagerly file into the room…they seemed to be excited…