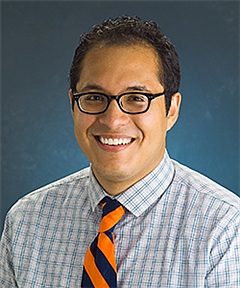 Colón was honored with the Franklin H. Williams award on October 8 for his commitment to community service.

“In memory of Franklin H. Williams, we honor some of the brightest stars in our Peace Corps family who are incredible champions of our mission at a time when the Peace Corps has never mattered more,” Hessler-Radelet said. “These extraordinary individuals embody what the Peace Corps is all about – a lifelong commitment to service, social justice and cross-cultural understanding.”

As an environmental education Peace Corps volunteer in Paraguay from 2010-12, Colón carried out sustainable tourism development work, youth group education, and cultural exchange activities. His most successful project was a national environmental youth group workshop conference called “Paraguay Verde,” which fostered youth interest in environmental stewardship and is now in its fifth iteration with current volunteers in Paraguay. But for Colón, Peace Corps service was about more than gaining skills and helping others overseas – it was about sharing his experience with people back home and inspiring others to consider making a difference. Even while he was still a volunteer in Paraguay, the Chicago native kept in touch with friends and family and used Skype to chat with prospective applicants at a recruitment event. While home on leave during his two-year service, he was the featured speaker at a 200-guest send-off event for new volunteers in Chicago.

“I'm beyond honored to be a 2014 Franklin H. Williams award recipient,” Colón said. “As I explain the three goals of Peace Corps to people, it's very clear that the first two are constrained to your 27 months abroad, while in service. The beauty of Third Goal is that every volunteer, at any and all stages in their life post-service, can engage in it.”

Now pursuing his Master of Education in Human Resources Development and working as an Undergraduate Recruiter at the University of Illinois Urbana-Champaign, Colón continues to assist with Peace Corps recruitment there. (He also earned his bachelor’s degree in natural resources and environmental science from Illinois in 2010.)

As the New Volunteer Coordinator for the Lesbian, Gay, Bisexual, and Transgender Returned Peace Corps Volunteers association, he works closely with Peace Corps’ Office of Diversity and National Outreach to engage prospective, current, and returned volunteers, in addition to promoting recruitment and Third Goal activities to the Queer community through the group’s social media.

Both in his everyday life and while working, Colón never misses an opportunity to share his personal Peace Corps story with diverse audiences. At his alma mater high school, Whitney Young in Chicago, Colón recently spoke to students about the way Peace Corps could, one day, transform their lives, as it has transformed his. In the summertime, he enjoys drinking tereré (Paraguayan iced tea) and listening to music from Paraguay, sharing the country’s culture with his friends and co-workers in the U.S. This year he waved the Peace Corps flag at multiple Pride events, inspiring countless LGBTQ Americans to serve.

Colón’s commitment to bettering his world also extends beyond Peace Corps’ Third Goal. He currently volunteers with the University’s Intensive English Institute as a conversation partner, helping students from South Korea and Saudi Arabia improve their English and learn more about American culture. “The parallels to Peace Corps pre-service training are so strong, so I'm glad I can give back to visitors to our country the same way I was so warmly received by the people of Paraguay,” Colón said.

About the Franklin H. Williams Award
Franklin H. Williams was an early architect of the Peace Corps. He worked at the agency from its inception in 1961 to 1963 and helped Sargent Shriver, the first Peace Corps director, to promote the agency and its programs to the world. Williams’ exceptional public service career included positions as Peace Corps Regional Director for Africa, U.S. Representative to the United Nations Economic and Social Council, and U.S. Ambassador to Ghana. Since the first Franklin H. Williams award ceremony in 1999, 107 outstanding returned Peace Corps volunteers have received the award. For more information on the award and bios for all awardees, please visit: http://www.peacecorps.gov/resources

About the Peace Corps
As the preeminent international service organization of the United States, the Peace Corps sends Americans abroad to tackle the most pressing needs of people around the world. Peace Corps volunteers work at the grassroots level with local governments, schools, communities, small businesses and entrepreneurs to develop sustainable solutions that address challenges in education, health, economic development, agriculture, environment and youth development. When they return home, volunteers bring their knowledge and experiences – and a global outlook – back to the United States that enriches the lives of those around them. President John F. Kennedy established the Peace Corps in 1961 to foster a better understanding among Americans and people of other countries. Since then, more than 215,000 Americans of all ages have served in 139 countries worldwide. Visit www.peacecorps.gov to learn more.