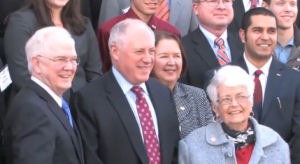 While lawmakers passed a budget with substantial funding for higher education last year, the university still has not received much of the cash.

“They still haven’t paid us almost $500 million,” said Amy Eichhorst, director of Illinois Connection. “We need that money in order to run the university and for next year we’re asking them not to cut the budget.”

Alumni and students got a surprise when Governor Quinn showed up for their group photo on the steps of the Illinois State capitol.