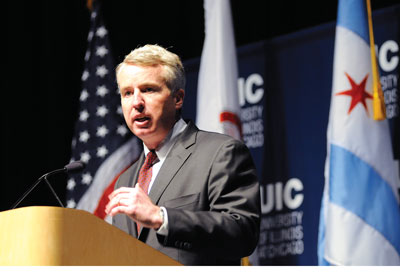 Christopher Kennedy, chair of the university’s Board of Trustees, speaks at the UIC Forum April 14. “I know what it takes to get companies to move here, and to get them to expand. It’s easier to grow a company here than to import one."

Don’t just sit there, do something.

That’s the basic message Christopher Kennedy, chairman of the University of Illinois Board of Trustees, had for his audience and the university at large last week when he presented “The Research University and Our Future” at the UIC Forum.

“Get active with your state rep, your state senator, the governor’s office, your congressman and the two senators,” Kennedy told an undergraduate who asked what he could do to advance Illinois’ economic future.

“If you call each of them and say, ‘You need to restore our funding, you need to pay on time, you can’t fix the pensions for the state and create a problem for the university’ — that will be tremendously important to us.”

Check out the rest of the article at UIC News.