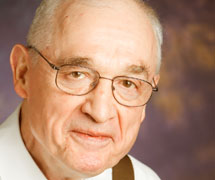 Nick Holonyak Jr., UI Alumnus and a renowned innovator of semiconductor devices, has joined the elite ranks of scientists and inventors inducted into the Engineering and Science Hall of Fame.

A University of Illinois professor who created the first usable light-emitting diode will join Thomas, Edison, the Wright brothers and a select group of scientists and inventors when he's inducted into the Engineering and Science Hall of Fame next month.

The university said Friday that 82-year-old Nick Holonyak Jr. will be inducted in a ceremony in Dayton, Ohio, on Nov. 3. He will be added to the Hall of Fame along with Nikola Tesla and James Tsui.

Since its creation by Holonyak the LED has become commonplace. It is used in everything from instrument panels to head lamps used by joggers. His work has also helped create household dimmer switches, the lasers central to CD and DVD players, and fiber-optic communication.

Check out the Alumni Icon article on Nick Holonyak at http://www.uialumninetwork.org/article.html?aid=237