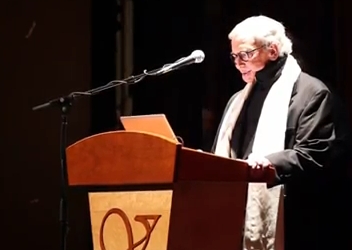 This documentary is a 12-minute retrospective of the 13th annual festival which took place from April 27th to May 1st, 2011.

Some of the guests included world-wide star Tilda Swinton (I Am Love). Directors like Richard Linklater (Me and Orson Welles) and Norman Jewison (Only You) and the multi-talented writer/director/actor, Tim Blake Nelson (Leaves of Grass).  Directed and produced by Luke Boyce and Brett Hays of Shatterglass Studios in Champaign-Urbana.

You can view the documentary at Vimeo http://vimeo.com/32472553 or on YouTube http://www.youtube.com/watch?v=WMGPjWL_dS0

Please know how deeply we value your support and know that the festival would not be possible without you.

Have a wonderful holiday season.

From all of us at Ebertfest

Every year, Roger and Chaz Ebert, in association with the University of Illinois College of Media, puts on a 5-day film festival in Champaign-Urbana, Illinois, Roger's home town. The festival takes place in one location: The historic Virginia Theater in the heart of downtown Champaign and major filmmakers, stars, historians, critics and film-lovers from all over the world come to experience this annual celebration of film that includes films both old and new, hand-picked by Roger himself with the help of Chaz and festival director, Nate Kohn.

Festival passes went on sale Nov. 1 for the 14th annual Roger Ebert’s Film Festival, or “Ebertfest,” to be held April 25-29 at the Virginia Theater in Champaign, Ill., and at the University of Illinois at Urbana-Champaign.

The festival will feature films selected by Ebert that he believes have been overlooked by audiences, critics or distributors.

The passes, which cover all 12 screenings during the five-day event, are $135, plus $2 each for processing. They can be purchased starting Nov. 1 through the festival website, the Virginia Theater website, or the theater’s box office (217-356-9063).

Tickets for individual films will be available April 4. Admission is $13 ($11 for students and seniors).