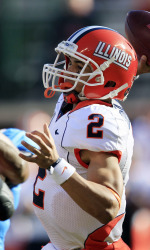 SAN FRANCISCO (AP) - UCLA players walked off the field at AT&T Park, through the tunnel and into the wrong side of the program's proud history.

Even those proved too hard to reach.

Kevin Prince threw a costly interception that Terry Hawthorne returned for a touchdown, finishing off UCLA's forgettable season with a 20-14 loss to Illinois in the Fight Hunger Bowl on Saturday.

"This is not the way we wanted to go out, to send our seniors out," tight end Joseph Fauria said. "But at the same time, I guess there's some sort of relief for guys that have another year and looking forward to new beginnings."

"It's upsetting that we couldn't get one for the seniors." Terry Hawthorne intercepts a pass from UCLA's Kevin Prince and returns it for a touchadown. Check out highlights of the Illinois win at the Kraft Fight Hunger Bowl at http://www.fightingillini.com/video/?vid=1358830392001

The game between two six-win teams who have already fired their head coaches matched the underwhelming expectations.

UCLA was held to 18 yards rushing in its third straight loss. Prince threw two TD passes, including one in the closing minute to Nelson Rosario after the game had been decided.

But it was an earlier pass by Prince that proved decisive and helped give Illinois its first bowl wins in consecutive seasons in school history. Three plays after Derek Dimke missed a 37-yard field goal for Illinois late in the third quarter, Prince dropped back and threw to his left looking for Shaquelle Evans.

Hawthorne read the play perfectly and stepped in front of the throw for the interception and had a clear path to the end zone for the score that gave the Illini a 10-7 lead.

Read more about the Illinois bowl victory at http://www.fightingillini.com/sports/m-footbl/recaps/123111aaa.html

Share this sports highlight with other alumni and friends