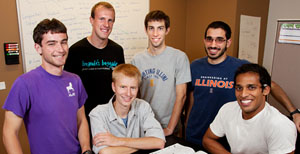 A University of Illinois student-led effort to develop a low-cost prosthetic arm for people in developing countries has expanded to different parts of the world.

"We're growing into a more global organization," said IPT President Adam Booher, outlining the group's progress to an audience of 65 at the UI Research Park this week.

Students affiliated with IPT — originally known as Illini Prosthetic Technologies — have made two trips to Guatemala, where they tested prototypes of prosthetic arms on patients.

Recently, IPT Vice President Ehsan Noursalehi was part of a student group that traveled to India for two weeks, visiting clinics and villages and building contacts there for use of the arms.

In January, former IPT President Jonathan Naber moved to Guatemala, with plans to stay there for a year and a half. He will serve as IPT's field director, directing operations abroad and arranging for long-term validation of the arms with amputees in the field.