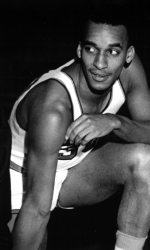 Three Fighting Illini basketball legends will be honored during the 2012-13 basketball season when their honored jerseys join the 30 already hanging at the Assembly Hall.

Mannie Jackson, Govoner Vaughn and Tal Brody, all trailblazers and pioneers at Illinois and internationally in the game of basketball, will become the latest to be recognized.

"These three men have made a tremendous impact on Illinois and international basketball," UI Director of Athletics Mike Thomas said. "Mannie and Gov will always be remembered for their perseverance during a very turbulent time in our nation's history, and for their contributions in continuing the tradition of the Globetrotters to a global audience. Tal is considered a national icon in Israel for his leadership and ambassadorship for the game of basketball there. All three men are greatly deserving of this recognition."

High school teammates from Edwardsville, Ill., Jackson and Vaughn became the first African-American letter-winners and starters for the Illini in the 1957-58 season. Jackson was named team captain as a senior in1960, while Vaughn was selected the team's MVP that season. Both were trailblazers during an era of social change, opening doors to generations that followed.

"My affiliation with the University of Illinois continues to be a source of deep pride for my family and me," Jackson said. "I am deeply honored by the Division of Intercollegiate Athletics' honored jersey recognition."

Jackson finished his Illini career fifth on the school's all-time scoring list with 922 points, averaging double figures all three years. After playing professionally with the Harlem Globetrotters, he began a long and distinguished business career first at General Motors, then at Honeywell, Inc., where he quickly became one of the company's top executives. In 1993, Jackson purchased the Globetrotters and revived the legendary team's status as one of America's favorite teams. Jackson has been heavily recognized throughout his professional career as one of the nation's most powerful and influential black corporate executives.

Vaughn remains one of the top 50 scorers in Illinois basketball history with 1,001 points and a 15.2 points-per-game average during his career. He also averaged 8.2 rebounds per game. Vaughn also played professionally with the Globetrotters and still works for the organization. Because of their illustrious careers, Jackson's No. 30 and Vaughn's No. 35 will hang among the honored jerseys at the Assembly Hall.

"I cherish my long and wonderful association and affiliation with the University of Illinois both academically and athletically," Vaughn said. "Having my jersey permanently on display is truly an honor for me and my family. Thanks to everyone who made this possible."

Brody was the point guard on the 1963 Big Ten championship squad and was a three-year starter through the 1965 season. However, it was his contribution to the game of basketball as Israel's first modern-day sports hero as a player, coach and currently as Goodwill Ambassador of Israel that has earned his No. 12 a spot among the honored jerseys.

"I can reminisce for hours and hours as I cherish those days when I was a Fighting Illini player, and I value and cherish this honor that was bestowed upon me to be among the Fighting Illini's best," Brody said."I look forward to returning to the Assembly Hall and breathing that basketball spirit that has always been a major part of me.

"This honor closes a missing link that now I can add in the chain of my basketball career. After my Trenton High School jersey No. 12 and Maccabi Tel-Aviv jersey No. 6 were hung up on the rafters, and now the Fighting Illini No. 12, I have immense feeling of pride that I have made a difference to all three teams that I have played for in my basketball career and the many thousands of fans that enjoyed sharing our success."

Brody ranks among the top 40 scorers in Illinois history with 1,121 points, an average of 15.1 points per game. After being selected as the 12th pick of the 1965 NBA Draft, he traveled to Israel, where he led the U.S. basketball team to a gold medal in the 1965 Maccabia Games. He ended up beginning a long professional career in Israel, including a stirring run in 1977, when Brody led Israel to the European Cup Basketball championship, including a win over the heavily favored Soviet Red Army. In 1979, he was awarded the country's highest civilian honor, the Israel Prize, and is revered as a national hero, icon and legend.

Dates on when the jerseys will be lifted to the Assembly Hall ring are still to be determined.