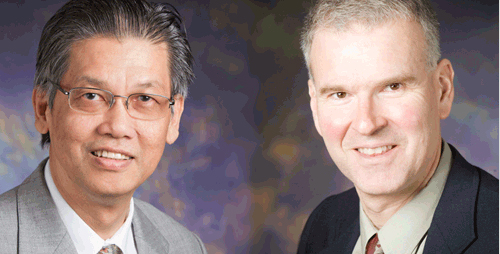 Weng Cho Chew and Thomas J. Overbye, both professors of electrical and computer engineering at the University of Illinois at Urbana-Champaign, have been elected to membership in the National Academy of Engineering.

“Having two Illinois faculty members inducted into NAE in the same year is truly an outstanding accomplishment for our institution, the College of Engineering and the department of electrical and computer engineering,” said Ilesanmi Adesida, the provost and vice chancellor for academic affairs of the Urbana campus. “Both Weng Chew and Tom Overbye are groundbreaking and innovative researchers whose work exemplifies the excellence that characterizes Illinois. I am proud to know them as colleagues, and today is another great day to be a part of the Illinois campus.”

Chew was cited for his contributions to large-scale computational electromagnetics of complex structures. He is an expert in the field of electromagnetic scattering – the way that light, radio wave and microwave and their energy diffuse as they pass through or reflect off a medium. While some scattering data can be useful, such as with radar, remote sensing or X-rays, some scattering causes interference to signals, as in a computer chip. Chew works to develop fast and efficient computational algorithms to address scattering problems at different length scales.

Chew earned his Ph.D. in electrical engineering at the Massachusetts Institute of Technology in 1980. He joined the faculty at Illinois in 1985. He is a fellow of the Institute of Physics, the Optical Society of America, the Institute of Electrical and Electronics Engineers and the Electromagnetic Academy. He also is affiliated with the department of computer science at the U. of I.

Overbye, the Fox Family Professor in electrical and computer engineering, was cited for his work on visualization and analysis tools for power systems. His research focuses on the infrastructure of the power grid, including visualizing power system information, optimizing power distribution, integrating renewable energy sources such as wind and solar into the power grid, and power grid cybersecurity. Overbye developed the PowerWorld Simulator, an innovative computer program for power system analysis and visualization.

Overbye earned his bachelor’s, master’s and doctoral degrees in electrical engineering at the University of Wisconsin-Madison before joining the faculty at Illinois in 1991. He was a member of the U.S. Department of Energy’s investigation team for the Aug. 14, 2003, blackout. Overbye also is affiliated with the Information Trust Institute at the U. of I.