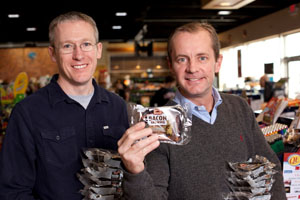 Bringing Home the Bacon (Brownie, that is)

UIS alumni shoot for the moon with distinctly unusual dessert

Does it sound crazy that a kid could grow up on a pig farm, learn to bake before he could pitch a bale of hay and someday create a snack treat laced with bacon that just might sweep the nation?

“I’m an eclectic fella, and I’ve had a lot of wild ideas in my time,” he says, “but I never followed through on [them].”

Chicago, soufflés and serendipity
One fateful night in 1998, Evers was walking by the InterContinental Hotel in downtown Chicago and decided to step in for dessert.

“On the menu was something called the ‘Bacon and Chocolate Soufflé,’” he remembers. “I thought it was the best thing I’d ever eaten in my life.” When he got home, he said to a friend, “I’ve got to re-create that taste,” and started making bacon brownies.

But why bacon brownies?

“It’s what was in the pantry at the time: Duncan Hines Brownie Mix and fried Oscar Mayer bacon, chopped up,” Evers admits. “That was the first Bacon Brownie.”

Fourteen years later, the first such items produced by Evers’ company, Bacon People, were sold in November in convenience stores in central and southern Illinois and southeast Missouri. By mid-December more than 3,000 Bacon Brownies had been purchased at $2.49 apiece. Based on that early success, Evers is gearing up for bigger production this year.

But we’re getting a little ahead in this unconventional story.

A New Year’s resolution
“I was raised on a pig farm by a coal miner’s daughter right here in Greenview with a population of 800,” says the talkative Evers, referring to his hometown just north of Springfield, where he still resides. “I’m a sixth-generation Greenviewian from an old farm family. We’re not pig farmers anymore, but my uncle still farms 2,800 acres of grain.”

After graduating from high school, Evers bounced around several colleges. He worked with a cousin in St. Louis producing video commercials. He worked as a lobbyist. He worked for the state Department of Transportation. After he and his wife, Lori Gorney Evers ’98 LAS, had a daughter and son in 2004 and 2006, respectively, Clay became a stay-at-home dad and enrolled in the business management program at UIS. But when the calendar turned to New Year’s 2010, the family, who, according to Evers, was “just kind of struggling through life,” decided to “make something happen.”

Evers, whose first baking venture was making peanut-butter cookies at age 6, had been making pork-packed brownies in his home kitchen and pushing them on friends for years. (In fact, once when he and Lori didn’t attend an annual Fourth of July party, the host called him to report that his guests were unhappy due to the absence of bacon brownies.) So Evers had an inkling of the temptation of his tasty treat.

“This brownie has some type of strange appeal,” he says. “I knew that from the beginning.”

“Drew was the only person I knew who had enough money to burn on something as crazy as this,” Evers says, laughing.

“We didn’t know if the brownie would go any further than the kitchen,” Stevens says. “I realized the majority of these kinds of ventures never go anywhere, but nobody else was making this product, so I thought the Bacon Brownie had a chance.

“We’re selling something that’s an indulgence, and that’s always fun.”

It’s also savvy, as “TheTopTens” ranks chocolate at No. 2 and bacon at No. 9 on its online list of favorite foods. A concoction of a fudge brownie mixture and applewood smoked bacon, the Bacon Brownie fulfills two cravings in one big chomp.

With Stevens’ financial backing, Evers spent the next two-and-a-half years getting his “home brew” brownie mix industrialized, that is, ready for large-scale production. As the U.S. Department of Agriculture requires any product with a meat content of more than 3 percent to be produced in a certified facility, Evers also searched for an appropriate baking location, as the bacon quotient in his brownies, Evers says, is “north of 10 percent.”

After finding a baker in Pennsylvania, Evers received USDA approval for his
creation last July. Bacon Brownies made their shelf debut in 12 stores in parts of Illinois and Missouri on Nov. 12, the day before Evers’ 43rd birthday. More than 3,000 were sold in the first month. In the first week of December, another 63 stores began stocking the brownies.

Evers won’t reveal how much he clears on each brownie, but whatever the figure, it is hard-earned.

Love at first bite
So where is all of this headed? Is the Bacon Brownie an unconventional idea that’s here to stay? According to data from a taste test conducted by a Chicago consumer-marketing consultant, one in four people who sampled the brownie loved it.

“That’s a crazy high number,” Evers says, who adds that surveys indicate the Bacon Brownie is popular among a curious mix of fans – Asian-Americans (whose cuisine often includes a salty-sweet combination), rural folks and hipster urbanites.

“We’re trying to cast our nets and get a MoonPie,” Evers says, referring to the
well-known pastry comprising graham crackers and marshmallow filling, a million of which are produced daily. “That snack’s been on every shelf in every grocery store for 100 years.

“That’s what we want. We want to create a MoonPie.”

In a sense, Evers has been shooting for the moon ever since he baked that first batch of peanut-butter cookies as a youngster.

“Having a food product is pretty much what I’ve wanted to do with my life all along, but I just never got into this position before,” he says. “I was distracted by life. I didn’t focus on exactly what I wanted to do.