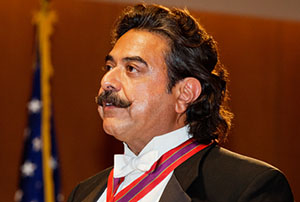 U. of I. alumnus, philanthropist Shahid Khan named commencement speaker

Khan, a naturalized U.S. citizen who left Pakistan in 1967 at age 16 to attend the U. of I., started working for Flex-N-Gate in 1970 while he was studying engineering at Illinois. He graduated with a bachelor’s degree in industrial engineering and was immediately hired as Flex-N-Gate’s engineering manager.

Khan left the company in 1978, starting his own company, Bumper Works, with a $50,000 small business loan and $13,000 in savings. Two years later, thanks to his new company’s success, he purchased Flex-N-Gate. The merger of the companies marked the transition from making aftermarket auto parts to becoming an original equipment manufacturer, as well as the point at which Flex-N-Gate became a global supplier.

Urbana Chancellor and U. of I. Vice President Phyllis M. Wise said Khan was selected to be this year’s commencement speaker because his life’s story exemplifies the type of graduate the university produces.

“Mr. Khan used his U. of I. educational and life experiences as a launching pad for an enormously successful career,” she said. “His entrepreneurial spirit turned an idea into an international manufacturing giant. At the same time, his philanthropic efforts continue to provide opportunities to future generations to follow his same path. Shahid Khan embodies not only the U. of I. experience, but the promise America offers to anyone willing to learn and to work hard.”

Khan has served on several U. of I. boards, including the President’s Council and the U. of I. Foundation board of directors. Along with his wife, Ann Carlson Khan, a U. of I. alumna, Khan has made several gifts to the university, including to Krannert Center for the Performing Arts, the University Library, the College of Business, the College of Applied Health Sciences and to the Division of Intercollegiate Athletics. In 2007, he started the Khan Foundation, which supports applied health sciences nationally.

Khan was inducted into the Engineering at Illinois Hall of Fame in 2010. In 2011 he was named a Lincoln Laureate by the Lincoln Academy of Illinois for his philanthropic work. He is the president of the Chief Executives Organization, a global community of the top 2,000 leaders in business, government and non-profit sectors, and recently started Bio-Alternative LLC, which specializes in biofuels research and development.

Khan is the owner of the Jacksonville Jaguars team in the National Football League.