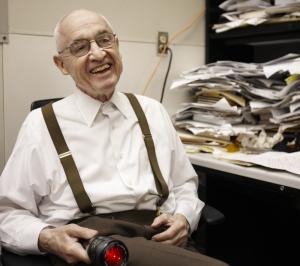 Nick Holonyak Jr. elected a charter fellow of the National Academy of Inventors

LED inventor Nick Holonyak Jr., a professor of electrical and computer engineering at Illinois, is one of 101 innovators elected a charter fellow of the National Academy of Inventors.

Nick Holonyak Jr., a John Bardeen Professor of Electrical and Computer Engineering and Physics at the University of Illinois, has been chosen to be a charter fellow of the National Academy of Inventors.

Holonyak, who invented the first practical light-emitting diode, is among 101 top scientists, innovators and leaders from the academic world being recognized for their exceptional achievements “in creating or facilitating outstanding inventions that have made a tangible impact on quality of life, economic development and the welfare of society.”

The inaugural class of fellows comprises inventors and innovators from 56 research universities and nonprofit research institutes across the U.S. and around the world. All are named inventors on patents issued by the U.S. Patent and Trademark Office. Collectively, they hold more than 3,200 U.S. patents.

Holonyak is a pioneer in the field of optoelectronics – devices that convert electricity into light or vice versa. He gained eminence through his numerous inventions and contributions to advances in semiconductor materials and devices. LEDs, semiconductor crystal devices that emit light when electrified, now are commonly used on items ranging from instrument panels to bicycle taillights. His innovation also has contributed to technology in household dimmer switches, lasers that run CD and DVD players and fiber-optic communication.

A faculty member at Illinois since 1963, Holonyak has focused his recent research on transistor lasers. Though still in the early stages of development, transistor lasers could dramatically improve the speed and availability of electronic communications.