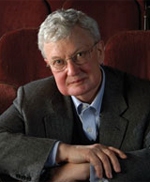 Ebert and Gene Siskel co-hosted their iconic review show until Siskel's death in 1999 after a battle with a brain tumor.

The Chicago Sun-Times, the base of operations for Ebert's syndicated reviews, announced his death at age 70.

In an essay on his blog Tuesday, Ebert explained he was planning to slow down and reduce the number of movie reviews he wrote. Ebert had already lost his voice and much of his jaw after battling thyroid and salivary gland cancer.