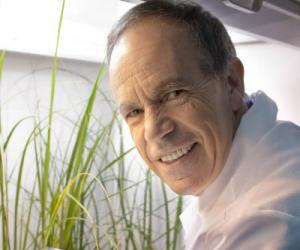 University of Illinois Professor Elected Fellow of the Royal Society

University of Illinois Gutgsell Endowed Professor of Crop Sciences and Plant Biology and Institute for Genomic Biology faculty member Stephen P. Long has been elected as a Fellow of the Royal Society of London, the world's oldest scientific academy in continuous existence. Members are elected for life on the basis of excellence in science, via a thorough peer review process.

“The Royal Society was just a few miles from where I was brought up in London,” says Long. “Its fame as the meeting place of the leaders and best-known names in science, engineering and medicine was known to us at High School and throughout my career, but I could never have imagined to one day be a part of this institution.  As a Londoner by birth it is a very special honor.  Of course this recognition owes much to the many amazing graduate students, research fellows and academic colleagues at Essex and at Illinois who have worked with me, discussed, critiqued, supported and helped develop the ideas that have led to the discoveries recognized here.”

Long has been recognized for his leadership in research on the limits to photosynthetic productivity of crops, and how these are altered by global atmospheric change. A type of photosynthesis known as C4 is recognized as being the most efficient in terms of use of light, water and nitrogen. Long was the first to discover a C4 plant in a cold climate and also discovered the most productive plant known on Earth, a C4 grass of the Amazon floodplain. He was also the first to show that Miscanthus (a C4 plant) was exceptionally productive, even in the relatively cool climate of England.

Upon his move to Illinois, together with his students he first demonstrated that Miscanthus could be exceptionally productive in the Midwest. As a result it is emerging as promising and highly sustainable bioenergy crop in Europe, and now the USA.  His work also includes understanding the response of plants to rising atmospheric carbon dioxide and ozone. He led the development of the SoyFACE facility at Illinois, the largest open-air laboratory for understanding how major crops will respond to atmospheric changes, allowing more accurate predictions of future food and feed supply.

Long has also pioneered modeling the full photosynthetic process in silico, providing a unique engineering framework for predicting how photosynthetic efficiency in crops may be improved; some of which have now been realized. This work culminated in a $25M award from the Bill & Melinda Gates Foundation, led by Long, to apply this approach to rice and cassava, to raise their yield potential.

Long's academic career includes over 20 years at the University of Essex, in the Department of Biological Sciences, followed by his current appointment at the University of Illinois at Urbana-Champaign. Together with Chris Somerville and Jay Keasling of UC Berkeley, he won the international competition by BP Group for the Energy Biosciences Institute, a $500M award over 10 years to provide research and development primarily to realize viable second-generation biofuels. Long served as the Deputy Director during the first five years of the institute, standing down to lead the Gates Foundation multi-national project.  He is currently a faculty member of the Genomic Ecology of Global Change research theme at the Institute for Genomic Biology, as well as editor-in-chief of the journals Global Change Biology and Global Change Biology – Bioenergy.

The Royal Society, founded in the 1660s, consists of distinguished members of scientific, engineering, and medical disciplines, with a fundamental purpose "to recognize, promote, and support excellence in science and to encourage the development and use of science for the benefit of humanity."  Long will join other notable Fellows including Albert Einstein, Dorothy Hodgkin, Isaac Newton, Stephen Hawking, Charles Darwin, Francis Crick, and James Watson with this recognition. Only 44 new members are elected each year, from a group of over 700 candidates proposed by the existing Fellowship.