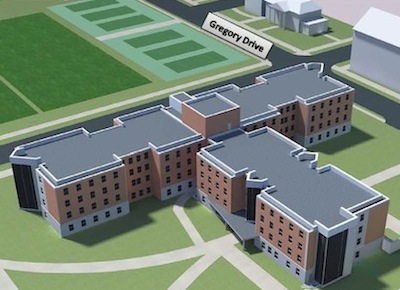 Demolition will start soon on Forbes Hall, one of the five remaining dorms in the old "Six Pack" complex, to pave the way for a third new residence hall in the Ikenberry Commons housing redevelopment.

Construction on Residence Hall No. 3 is scheduled to start next spring at the corner of First Street and Gregory Drive, the northwest corner of the commons. The site has been fenced off and demolition will get underway within the next two weeks, officials said Thursday.

The $80 million project was approved in March 2012 and calls for a four-story residence hall with 497 beds, as well as a new stormwater detention system in the west playing fields across First Street.

Initially that work included new artificial turf on the eastern half of the playing fields, but trustees last week increased the project budget by $3.17 million to extend the new turf to the western half as well so the fields can be used year-round. The Division of Campus Recreation agreed to pay for the full installation of the turf, and its contribution will cover contingency funds and professional fees associated with the work, officials said.