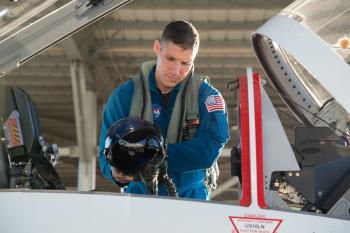 Aerospace Engineering alumnus Michael S. Hopkins will embark upon his first mission as an astronaut when he travels to the International Space Station in September.

Hopkins, a colonel in the U.S. Air Force, is in the final phase of his mission training as he and his crewmates prepare for their Sept. 25 launch aboard a Soyuz spacecraft from the Baikonur Cosmodrome in Kazakhstan. Hopkins will be traveling with Russian cosmonauts Oleg Kotov and Sergey Ryazanskiy.

Hopkins was Team Captain of the 1991 University of Illinois football team and was a Distinguished Graduate of the Reserve Officers Training Corps while he was on campus. He has earned several medals for his work throughout his career, and had served as a special assistant to the Vice Chairman of the Joint Chiefs of Staff.