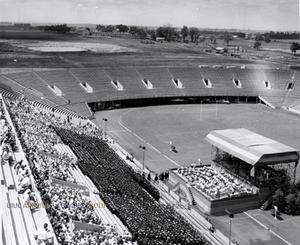 For the first time in 50 years, the University of Illinois commencement will move outdoors next spring to accommodate construction on the Assembly Hall, now known as the State Farm Center.

CHAMPAIGN — For the first time in 50 years, the University of Illinois commencement will move outdoors next spring to accommodate construction on the Assembly Hall, now known as the State Farm Center.

Graduates will participate in one campuswide commencement ceremony at Memorial Stadium from 9:30 a.m. to noon May 17, 2014, a Saturday.

Commencement has been held at the Assembly Hall since it opened in 1963, traditionally split into morning and afternoon ceremonies on a Sunday in May, UI officials said.

The renovation project will be in "full construction mode" at commencement time, so the campus had no choice but to find another venue, according to Laura Wilhelm-Barr, UI director of special events.

The $165 million project, scheduled to start next March, left commencement planners searching for a hall big enough to accommodate all the graduates and their guests, Wilhelm-Barr said. About 2,700 UI graduates attended the last commencement, along with their families, academic leaders and other spectators.

Memorial Stadium was the only venue big enough, she said.

"There's no other place you can put 10,000 people," Wilhelm-Barr said. "There just isn't anything else that comes even close."

The 2015 and 2016 commencement activities will likely be held at the stadium as well, UI officials said. Construction work is scheduled to continue until November 2016, with breaks during the UI's basketball season.

The commencement site will be re-evaluated each year, Wilhelm-Barr said.

"It may return at some point in the future to State Farm Center. It may stay at Memorial Stadium. We just don't know," she said. "This may not be a forever decision ... or people may love it."

Planners chose Saturday for several reasons. For one, it no longer conflicts with Mother's Day, a concern expressed by some graduates and families in the past, she said.

"It was also a way to kick off commencement weekend and bring everybody together, hoping that might encourage attendance, rather than at the end of the weekend," Wilhelm-Barr said.

Attendance at the Assembly Hall ceremony had declined over the years as the popularity of more personal ceremonies held by individual colleges and departments rose. It peaked in 1983 at 26,223 (3,955 graduates plus 22,268 guests) to 11,386 last year.

With a stadium seating capacity of 69,000-plus, commencement will no longer have to be split into two, allowing "one big truly campuswide ceremony," she said. There will be no limit on tickets, and commencement speakers won't have to give their remarks twice.

The Assembly Hall was also used for larger convocation ceremonies by some UI colleges, which will now divide their graduates into two ceremonies, she said. Engineering and Applied Health Sciences will use Huff Hall, the next largest venue on campus, and Business and Agricultural, Consumer and Environmental Sciences will use both Huff and the Krannert Center for the Performing Arts.

Academic units that formerly held ceremonies on Saturday morning have moved them to later in the day or Sunday, with events now scheduled until 9 p.m. both days, Wilhelm-Barr said. Nothing is scheduled at the same time as the campuswide commencement.

For more about UI's Commencement Ceremony moving to Memorial Stadium, please refer to the News Gazette.