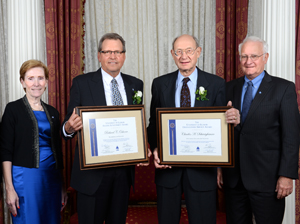 Two awards were presented at the UIS Alumni Gala on November 1st with a reception at the Illinois Executive Mansion featuring cocktails, food stations, and networking. With over 250 people in attendance, Richard Osborne, a UIS alumnus, and Charles Schweighauser, a UIS Professor Emeritus, were recognized for their outstanding contributions by President Easter, Chancellor Koch, and the Alumni Association.

Mr. Osborne began his corporate career at The Pillsbury Company, and began working in the Springfield, IL operation in 1969. It was during this time which Osborne completed his master’s degree at UIS (then SSU). Mr. Osborne joined Scotsman Industries in 1979, and rose through the ranks to assume the position of CEO, Chairman and President of Scotsman Industries, Inc.
During the 10 years Osborne held the position, he was responsible for the direction and operating performance of the NYSE listed, international manufacturer. Company sales went from $150 million to $750million, achieved through vision, strategic management and sound business practices. By 1999, when Osborne led the sale of the company, Scotsman Industries was operating 22 plants in 6 countries.  Both Scotsman and Osborne have been cited and highly ranked in Crain’s Chicago Business (1998, 1999) and recognized as a Business Leader for the Chicago Region (1997).

As a founding member of Sangamon State University (now UIS) and faculty member in Physics/Astronomy, Environmental Studies and English, Professor Schweighauser has been the true Renaissance man on the SSU/UIS campus for decades.  The commitment to teaching and love of learning inspired Professor Schweighauser to teach for four decades.  His life of service to the University has not only inspired students who have sat in his classroom, but his community lectures about physics and astronomy linked with his leadership in establishing and staffing the UIS observatory and "star parties," starting in the early 70s, has educated thousands in our community, both children and adults.

Professor Schweighauser was the first director of the James S. McDonnell Planetarium in St. Louis.  He is also credited with developing a telescope for people with disabilities, the first of its kind in the world.

Read more at The State Journal-Register.