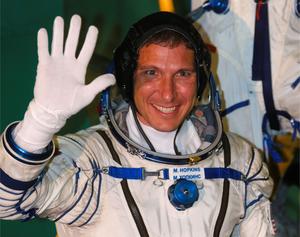 U of Illinois alumnus to fix space station

Illinois' favorite astronaut will strap on a spacesuit and go for a 6-hour walk outside of the International Space Station on Saturday.

NASA has ordered up a series of what it termed urgent spacewalks to fix a broken cooling line at the station. Officials decided Tuesday to send former Illini football team captain Mike Hopkins and fellow American astronaut Rick Mastracchio out as soon as possible to replace a pump with a bad valve.

It's a major repair that will require two or three spacewalks — which NASA has scheduled for Saturday, Monday and possibly Christmas Day.

Hopkins, a first-time space flier, and Mastracchio, a veteran spacewalker, trained for just such a repair before rocketing into orbit. They have been prepping all week, just in case they got the call from Houston.

That first spacewalk will be an experience Hopkins won't soon forget. Take it from fellow UI-alum-turned-astronaut Joe Tanner. The Danville native performed seven of them during four shuttle missions — and still remembers the nerves of No. 1 vividly.

"What you're not ready for is the actual emotional experience of being in the vacuum of space and how cool that is," Tanner said Tuesday night from Colorado, where he now works as a university professor. "When you first pop out of the hatch, you know this is a different environment."

But, Tanner was quick to add, "I would love to be in his place."

NASA defines spacewalks as "any time an astronaut gets out of a vehicle in space." Dale Gardner (UI Class of 1970) and Tanner (Class of '73) both did it, and now Hopkins (Class of '91) is set to join them at roughly 6:10 a.m. CST Saturday in the first of three 6-hour walks. Each will be broadcast live on NASA TV.

The Expedition 38 astronauts' new mission is to fix a broken cooling line at the space station. That requires replacing a pump with a bad valve with one of the spares they keep onboard. This is the same bulky 780-pound pump that was replaced by spacewalking astronauts in 2010. Three spacewalks were needed then

NASA hopes Hopkins and Mastracchio can make the swap in two trips and not have to spend the holiday working outside. Astronauts have ventured outside of their spaceship on Dec. 25 only once — in 1973 during Skylab, America's first space station. In 1999, shuttle astronauts finished a series of spacewalks on the Hubble Space Telescope on Christmas Eve.