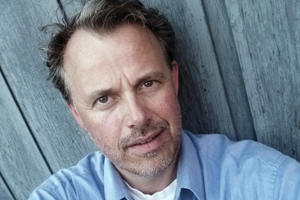 Edgar Barens' film is scheduled to air on March 31 on HBO.

UIC filmmaker Edgar Barens was at the Irvine International Film Festival in California Thursday when he received the news.

His film, “Prison Terminal: The Last Days of Private Jack Hall,” winner of the Audience Award for Best Documentary at the Irvine festival, had been nominated for an Academy Award in the Documentary Short Subject category.

The film, scheduled to air March 31 on HBO, uses exclusive footage from inside the Iowa State Penitentiary to tell the story of a terminally ill inmate who spends the final days of his life sentence in a hospice unit staffed by prisoner volunteers.

“I am thrilled to have received the Oscar nomination,” says Barens, documentary specialist in the Jane Addams Center for Social Policy and Research.

“Never in my wildest dreams would I have thought ‘Prison Terminal: The Last Days of Private Jack Hall’ would go this far.

“I think it’s testament to the compassion, the determination and the human spirit essential in making a prison hospice program function and blossom — especially in an environment not normally conducive to the celebration of humanity.”

Barens lived and worked as producer and cameraman for six months inside the penitentiary. Given unprecedented access to the entire prison, he shot more than 300 hours of footage for the documentary, which is just under 40 minutes long.