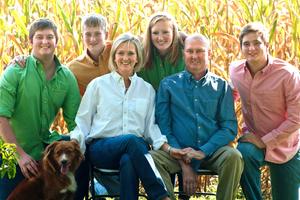 It all began at the University of Illinois at State Farm Center.  John and Mary Ellen Penicook met during summer school in 1980, when John and his Delta Sigma Phi friends, and Mary Ellen and her Gamma Phi Beta friends decided it would be fun to climb the painters’ scaffolding around the Assembly Hall.  They made it to the very top of the roof and spent some quality time enjoying the view of the south farms before being summoned down by campus security. After receiving a good scolding by security, John asked Mary Ellen out on their first date.

They married in Champaign six years later, had four children, three Illini and one hopeful Illini.  They have attended countless Fighting Illini basketball games as spectators and had the incredible opportunity to play basketball in the Assembly Hall with Dee Brown, James Augustine and Calvin Brock at Illini Family Basketball Camp.  They also were fortunate enough to accompany the 2004-05 team to the Big Dance in Indianapolis, Ind.  Everyone at work and in LaGrange knew of John’s love of the Illini, and particularly Illini basketball.

“Some of our best memories as a couple and as a family have revolved around Illini basketball,” Mary Ellen said. “John loved to coach basketball at the park district and at the local grade school, and dreamed of coaching basketball in his retirement. John was born on a farm in Piper City, Ill., where he developed the drive to work hard, and exhibited that determination in everything he did.  When our family looked at the opportunity to leave a legacy for John, we agreed it was fitting to combine his love of Illini basketball and his drive for life, and create a John Penicook Drive leading to the doors of the new State Farm Center.”

“In 2011, after a very short retirement from UBS Global Asset Management, John was diagnosed with brain cancer, which quickly took him from us,” Mary Ellen continued.  “His spirit and drive remain in his family and our larger Illini family.  We will forever be reminded of John’s energy, ambition, and his love of Illini basketball when we walk up John Penicook Drive.”

The new horse shoe drive on the west side of State Farm Center will be named “John Penicook Drive” following the generous $1 million gift by his family.

“With John’s love of Fighting Illini basketball, it could not be more appropriate to have his name on the road leading up to the front doors of State Farm Center,” said UI Director of Athletics Mike Thomas. “Through the generosity of Mary Ellen and the Penicook family, the John Penicook Drive will ensure that John’s passion for the Fighting Illini will forever remain with the Fighting Illini Nation and to all those who enter this monumental facility.  His legacy lives on.”

“Working in development for Illinois Athletics is a tremendous opportunity because of the relationships you build with special people just like the Penicooks,” said UI Varsity I Director Chris Tuttle. “John was a great friend and will be missed by all of us.  The State Farm Center Renovation is important to the Penicooks because of its significance to the University of Illinois and Illini basketball, but also because the story of their lives together started at the facility.  Now, through their support of the project, this heartwarming legacy will be forever engrained in the hearts and minds of the entire Illini family.”

John and Mary Ellen Penicook are both multiple degree holders from the University of Illinois, of the class of 1981.  John earned a BA in psychology and BS in agricultural economics.  Mary Ellen earned a BA in history and economics and also earned her law degree in 1987.  John retired in 2009 as Managing Director of UBS Global Asset Management.  Mary Ellen practiced law at Pedersen and Houpt and Federal Signal before retiring in 1997.  Together, John and Mary Ellen have been strong supporters of the education of Fighting Illini student-athletes through the I FUND including establishing the John A Jr. and Mary Ellen Penicook Endowment Fund.  The Penicooks live in La Grange, Ill., and have four children – Katie, a 2012 UI graduate in biology and communications, Charlie and Robby, who currently attend the UI, and Tommy, who attends Fenwick High School.

John and Mary Ellen were inducted as honorary members of the Varsity “I” Association in 2012.  John passed away after a battle with cancer on March 6, 2013.

Information on the I FUND
The I FUND remains true to the founding principle of college sports: cultivating and preparing Illinois student-athletes to be leaders in industry, business and community.  The I FUND strives to provide the best in support services, athletic facilities and academic opportunities for all Fighting Illini student-athletes. This is only possible through the continued generosity of those private individuals, families and businesses involved in the I FUND program. By providing funding to meet the rising costs of financing each student’s education, lifelong fans and loyal alumni are able to connect on a very personal level with Illinois student-athletes and the Fighting Illini athletic teams.  Make an Impact. Leave a Legacy.  Join the I FUND team!