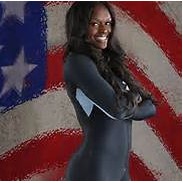 Krasnaya Polyana, Russia -- Former Illinois women's track and field thrower and sprinter Aja Evans won the bronze medal in the women's bobsled at the 2014 Sochi Winter Games. Evans and pilot Jamie Greubel, manning the USA-2 sled, placed third with an overall time of 3:51.61, just behind fellow Americans Elana Meyers and Lauryn Williams, who took home the silver with a time of 3:50.71. It's the first time two U.S. sleds have medaled in women's bobsledding.

"You go into the competition setting goals for yourself, and the ultimate goal is to win gold," Evans said after winning her first Olympic medal. "But you go in with nothing, so to come out with a bronze, you've reached a goal, you've achieved a lot. I'm just as excited as if I've won gold."

In her Olympic debut, Evans and Greubel nearly broke the start record that was set minutes earlier by USA-1 teammates Meyers and Williams (5.13), clocking a time of 5.17 seconds. Evans and Greubel finished the first run with a time of 57.45, followed by a second run time of 58.00 seconds to finish day one in third place. In the second and final day of competition, the duo clocked times of 58.00 and 58.16 to finish third overall, a comfortable 0.66 seconds in front of fourth-place Netherlands.

Evans, a five-time All-American and three-time Big Ten shot put champion at Illinois from 2007-10, decided to make the transition to bobsledding in March of 2012. Since then, the Chicago, Ill., native has won two-straight National Push Championship titles, a silver medal at the 2013 World Cup, a gold medal in a World Cup bobsled race held in Park City, Utah, and now a bronze medal at the Olympics.