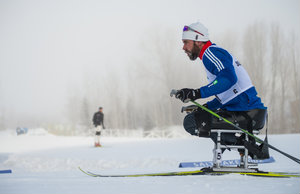 Three UI students heading to Sochi for the 2014 Winter Paralympics

The athletes are members of UI’s wheelchair track and field team will be competing in cross-country skiing and the biathlon events.

This winter, he’s traded that for sliding on the snow.

Pike is one of three University of Illinois athletes who are trading in their wheels for skis to compete in the Winter Paralympics in Sochi, which begin March 7.

Pike, Tatyana McFadden and Travis Dodson — all members of the UI’s wheelchair track and field team and road racers — will compete in cross-country skiing and biathlon in Sochi.

Pike likes both how skiing tests him and provides him access to places he wouldn’t otherwise be able to go.

“What I like most about skiing is how hard and challenging it is, as well as being able to go to places in the ski I can’t in a chair,” he said. “There are trails that run all through the mountains, and when you’re in the ski, there are no barriers.”

Pike competed in the 2012 London Paralympics in the 1,500 meters, the 5,000, the 4x400 relay and the marathon. He’s raced numerous marathons, including five Boston Marathons.